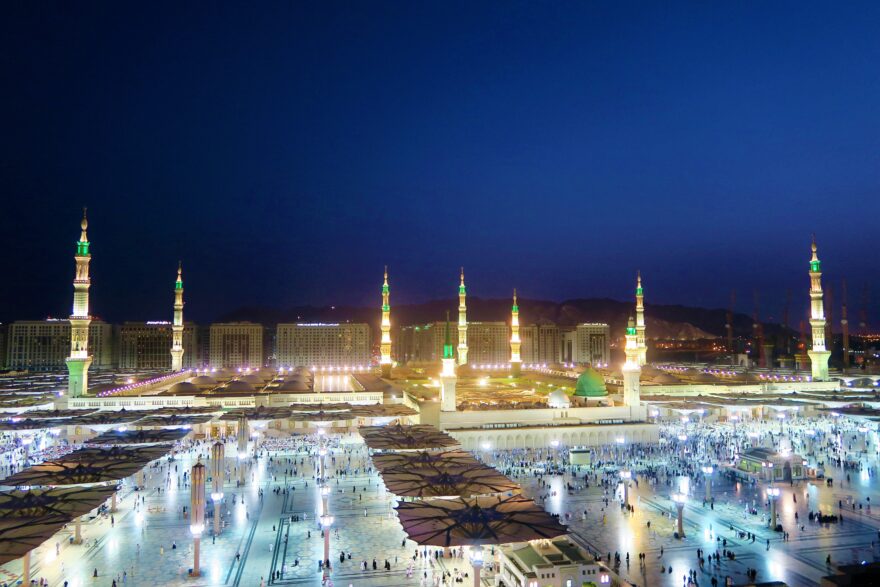 Islam is an Abrahamic monotheistic religion that believes in one God, Allah, and the prophethood of  Muhammad. They believe that the Qur’an is God’s final revelation for mankind. Muslims are followers of Islam, which is also called “The Way of Life.”  The Holy Quran is the holy book of Muslims and contains guidelines for all aspects of life. Muslims follow the Quran and the Sunnah, which is the way of life that Muhammad established.

Islam educates that there is only one God, Allah. Muslims believe in all the prophets of Islam including Abraham, Moses, and Jesus, they also believe that Muhammad is the last prophet. Muslims believe in the Day of Judgment, where Allah will judge all people based on their deeds.

. Islam teaches that salvation comes through faith in God and good works. Muslims strive to live moral lives and do good deeds as a way to please Allah. Muslims believe that many prophets were sent to teach the law of God. Like Jews and Christians, they honor several prophets, including Abraham, Moses, Noah, and Jesus. Muslims say that Muhammad is the last prophet. Islam is a religion of peace. Muslims believe in peaceful coexistence with people of other faiths. They also believe in social justice and equality for all people.

What does Islam mean?

Islam is a monotheistic religion, which was revealed to the Prophet Muhammad over 23 years, starting in 610 CE. The meaning of Islam is “submission (to the will of Allah).”

Islam presents itself as a way of life that seeks to achieve the spiritual wholeness and prosperity that God intends for all people. Central in Islam is faith in Allah as the one and only God, and in Muhammad’s message as expressed in the Quran. The Holy Quran states that “the religion cannot be complete without faith, worship, and obedience.” Islam teaches that salvation comes through submission to God, repentance for sins, and the right to live following His laws.

5 pillars of Islam are compulsory for all Muslims:

1. Testimony of faith (testimony): “There is no god but Allah, and Muhammad is His Messenger.”

3. Almsgiving (zakat): Muslims are required to give 2.5% of their wealth to the poor and needy each year.

4-Fasting: Muslims fast from dawn to sunset during the month of Ramadan.

5. Hajj: Muslims must perform Hajj once in their lifetime if they can afford it.

Who are Muslims and what is their faith?

A Muslim is a person who follows Islam. The word “Muslim” means “submission” or “obedience”. Muslims believe in one God. Muslims believe in the holy book of Islam, the Quran, and the will of the Prophet Muhammad. Muslims must pray five times – morning, five times, five times, sunset, and evening. They should also fast during Ramadan and help the needy. There are approximately 1.6 billion Muslims in the world, making Islam the second-largest religion after Christianity. Muslims can be found all over the world, but the majority of them live in countries like Indonesia, Pakistan, India, and Bangladesh.

How did Islam originate?

Islam is based on the belief in one God (Allah) and the teachings of the Prophet Muhammad. Muslims believe that Muhammad was the last prophet sent by Allah to mankind. Islam is the second biggest faith withinside the world, with over 1.6 billion fans worldwide. Muslims are found in all corners of the globe, and although the majority of Muslims are Sunni, there are also significant populations of Shia and Ahmadiyya Muslims. Islam teaches that there is one way to live life – according to the will of Allah. Muslims believe that Allah is merciful and just and that humans must submit to His will to achieve salvation. Islamic law (sharia) outlines how Muslims should live their lives, covering everything from everyday matters such as hygiene and diet, to more serious issues such as marriage, divorce, and crime.

How many followers of Islam exist in the world?

There is an expected 1.8 billion Muslims withinside the world, making Islam the second-biggest faith after Christianity. Muslims makeup about 24% of the world’s population and can be found in almost every country. Although its roots go back even further, scholars generally trace the creation of Islam to the 7th century, making it one of the youngest of the world’s major religions. Islam originated in Mecca, in the area of ​​modern Saudi Arabia, during the lifetime of the Prophet. Faith is spreading rapidly throughout the world today.

What is the difference between Islam and Islamic Fundamentalism?

What is Islamic sharia law?

Islamic Sharia Law is the moral code and religious law of Islam. It is derived from the Qur’an and Sunnah (the sayings and doings of Muhammad). In Arabic, it is known as Shari’a.

The basic sources of Islamic law are two:

– The Qur’an – This is the holy scripture. It was revealed to Muhammad in Arabic, although there are also other translations available.

– The Sunnah – This includes all the customs and practices which were handed down to Muslims by Muhammad. It includes the sayings, deeds, and silent approvals (known as “consent”) of Muhammad

The Quran (or Quran) is a holy book consisting mainly of verses written by Muhammad that Muslims believe were revealed by God through the archangel Gabriel to Muhammad from 610 CE until his death.

The Impact of Islam today:

The religion of Islam is one of the speedily-growing religions on Earth, with 1.6 billion followers and a presence in more than 60 countries. In the United States alone, there are about 2.6 million Muslims (according to the Pew Research Center). Some Muslims have high levels of income and education, while others live in poverty or face discrimination. Muslim Americans are employed at all levels of American politics and business, from mayors to chief executives. Many factors have contributed to this growth such as economic prosperity, good social welfare, the availability of Islamic education, and an increase in mosques.

In recent years, the connection between Islam and terrorism, and genocide has sparked political debate in many countries. The controversial term “radical Islam” has become a familiar label to describe the relationship between this religion and violence. A recent survey shows that most Muslim-majority countries have a very negative view of terrorist groups like ISIS. Muslims are trying to clear up misconceptions about their faith, but the religion is spreading rapidly. Islam is the speedily-growing faith globally today. Experts predict that Islam will overtake Christianity as the largest religion by the end of this century.